A new runway in iguazu falls 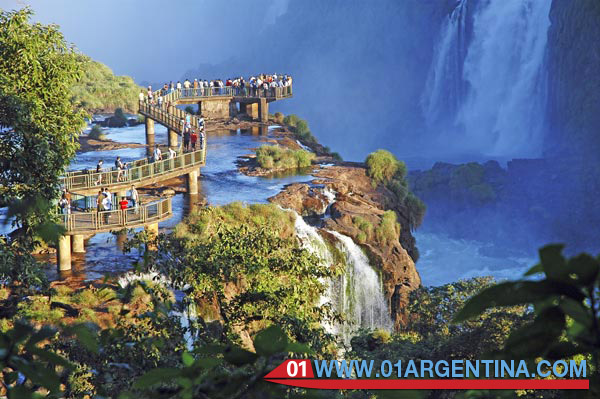 The new section, whose construction began in August 2013 and is expected to open in the first quarter of 2015 also generated a new way to explore this World Wonder, authorities explained the ride.
It is a stretch to depart from the path of viewpoint The Biguá, offering a closer view of the island San Martin and the jump of the same name, with the novelty of being a closed circuit, as the economy will not return your steps but always will advance, until returning to the starting point Falls Station.

This will give more comfort and fluidity to the transit of visitors who circulate all on the same side without the aglomeramientos formed by crossing two numerous-groups which will reduce the environmental impact to wildlife to accumulate less human presence.

The work meanders between tall trees, largely on the river, connecting a series of islets of red soil and covered with dense jungle vegetation.
In some parts are already installed metal corridors of the bridges over the piles of cement, although the rails and edges to cling missing, and cornering floor voids are still covered by woods.

Elsewhere are just long planks on the tubular structure, assemble a narrow path on the water running constantly red and bubbly or two feet down, not suitable for those who suffer from vertigo since the strips are flexible and shake by weight of one who walks on them.

Claudio Altamirano, Iguazu National Park, accompanied Telam in walk to work and showed details of environmental care, such as measures to prevent the transfer of structures or materials damaged tree species.

The logs are protected with tires and gateways, even the temporary timber, at no time rest on the ground but on blocks or frames, always with a “light” of at least about 10 centimeters, not to destroy the creeping vegetation or the habitat of a diverse fauna reduced in size.

Ezequiel Bermejo, Marketing Manager and Marketing Iguazu Argentina, concessionaire of the tourist area of Iguazu falls, the agency announced that the sector will return the walkways up to the treetops.

This, in addition to providing a different experience, will help protect them from heavy floods Falls, reaching more than ten fold increase flow of 1,400 cubic meters per second in normal times to 19,000.

However, the whole circuit will detachable modular railings like the way the Garganta del Diablo that if necessary and to avoid destruction by the force of water during floods, can loosen and let go with the flow to then pick them up and putting them back together in a few days.

The management also announced that in a next step, this new circuit will connect to the catwalks of the Devil’s Throat, so the viewpoints of the two biggest jumps ride will be unified: it and the San Martín.

Altamirano also showed that where the work is on a runway, half shadows were placed underneath to hold the waste and avoid falling into the water, while the piles are constructed in dry docks to avoid polluting the river with sediment materials.

The transfer of tools and materials, especially cement bags was slow during the first stages, as it was done without machinery and shoulder, but now reached a point where they can be brought by boat from a place called Toma de Agua, between Puerto Tres Marias and the gateway to the Devil’s Throat.

Bermejo mentioned no impact of the work on tourism as “the visitor does not intersect crews loading equipment or materials, because the move early or late night, after hours visit, and the forest cover here all within meters, so no one sees the construction site. ”

They agreed on the economic benefits that will bring new gateways to both the concessionaire and Puerto Iguazú, as they will make people devote more time to the falls and stay more days in the city, which will power the various actors tourism.

Bermejo said that the million who visited Iguazu falls 200,000 last year, only they stayed more than one day some 40,000 (3%), which now seeks to retain voluntarily with this new alternative.

In this endeavor, again the state and private enterprise are combined to realize works because it is a project of National Parks, which funds and conducts Iguazu Argentina, according to procedures established in the specifications of the concession.

This work employs about 40 people permanently and is in charge of the engineer Enrique Macchione, who has experience in construction management in other national parks.