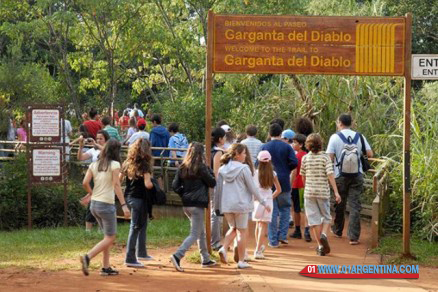 At first glance, the coati sells an image of tenderness, plush sympathetic and supporting actor in any animation of Disney. What they do not all know is that it is a consummate liar, willing to do anything to swipe the bag of chips to the distracted tourist (also takes passports and keys of the car). So stupid is this animal to steal food that in the Iguazu National Park had to change the system of the garbage cans four times, so that it could not open or break them.
That is why, if you are with your children waiting for the train that leads to the Devil’s Throat, the first thing to say to them is that they do not throw anything at a coati: not only does it hurt what we eat but can hit a blow-nails very long – and hurt. Visit and enjoying the Iguazu falls. This is just a recommendation for those who visit the Iguazu Falls as a family. The following are seven other tips, programs and tips to make the tour with children more enjoyable and enjoyable.

Waiting times are usually lengthened when there are children involved. It is always preferable to know in advance which are the best times to visit the jumps, to avoid queues and crowds on the catwalks.
If the plan is to know the Devil’s Throat, the ideal is to go after noon to avoid the contingents that leave early from the Central Station of the train that leads to that place. Not only does it circulate less people on the catwalk that looks at this phenomenal black hole of water but also, since 14, the sun is on the back and the photos come out better and not so hot. Where you should go tomorrow is to the lower and upper circuits, to walk quietly while the rest of the tourists are strafing selfies in the Devil’s Throat. Footnote: On June 8, 9 and 10 of last year, 90% of the 1100 meters of the Throat walkways were washed away by water in a historic flood (in three days the flow of the Iguazú rose 30 times). The stretch was enabled on December 22 last.

On stairs and trolleys

The Park authorities recommend the Falls as a program that is enjoyed more with children already in the primary (so you do not have to carry them). If you are still pushing a baby carriage it is good to keep in mind that the lower circuit, which contemplates jumps from below – where there is less sun and more animals, such as coatis and monkeys -, has a stretch of 300 meters with stairs, from the canyon of the Iguazu River, passing the Lanusse jump and up to Dos Hermanas Square. That not only discourages the wheel but also the driver’s mood (and, worse, the child himself).
In contrast, the superior is more enjoyable for boys – meters from the Cataratas del trencito ecológico station – and now also much longer: it went from 650 meters to almost triple. The prolongation (with an investment of 45 million pesos) starts at the Mbiguá jump course to a balcony over the San Martín jump, to return to the coastal islets of the Upper Iguazú delta, with catwalks at the height of the trees.

The safaris with children

There are three very interesting 4×4 safaris to do in the Cataratas area, but only one is very familiar. The first one is called Pioneros, lasts two hours and uses the dirt road that, traced with a clean machete, united the town of Puerto Iguazú with the jumps. The second, of equal duration, is Selva, which cuts off the rugged Yacaratiá Sur trail. The third safari, A la cascada, is the most kid’s friendly: an hour and a half in an uncovered vehicle up to the Salto Arrechea, which falls into a natural stone piletón, only mirror of water in the area where diving is allowed.