The legend of the Rainbow in Iguazu Falls

In Iguazu Falls , located in Puerto Iguazu, Province of Misiones, in the most stunning attraction called ” Garganta del Diablo ” sunny days you can see permanently a rainbow that draws the attention of all tourists and around there is a legend that the haunting. 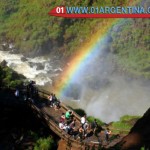 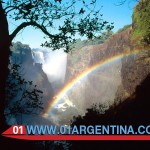 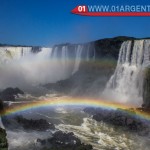 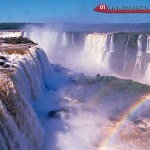 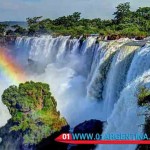 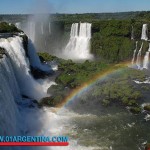 Legend has it that in the beginning of time , inhabited the Iguazu River and a huge monstrous snake, a guardian god Tupa son , whose name was MboI ( viper in Guaraní ) . The Caigangues – Guarani tribe in the region, were once a year, sacrificing a beautiful maiden and give it to MboI , throwing it into the river , which then flowed gently .

For the ceremony all the Guarani tribes were invited , even the most remote . It was so arrived at the head of his tribe , a young chieftain whose name was Tarobá .
By knowing Naipí , the beautiful maiden that year was devoted to sacrifice , rebelled against the elders of the tribe and tried in vain to convince them not to sacrifice Naipí .

With the denial of the elderly and to save his love so cruel fate, thought only of kidnap and slaughter last night charged a Naipí in his canoe and tried to escape by the river. But MboI , who had heard this , he was furious and his rage was such that, hunching his back, split the river forming the falls , trapping and Naipí Tarobá .

Covered by water , the boat and the fugitives fell from a great height , disappearing forever. But , fearing that love MBOI youth joined in the past , decided to separate them forever.

Naipí was transformed into one of the core rocks of the falls, perpetually punished by the raging waters , and was Tarobá become a palm tree located at the edge of an abyss, leaning over the river gorge .

After causing all this havoc, MBOI plunged into the Garganta del Diablo , where watch lovers , preventing back together . But on sunny days , rainbows exceeds the power of MboI and rejoins Naipí Tarobá and as a bridge of love .